Earlier this week I was doing my weekly shop in a local supermarket. I was getting a few bits and pieces but I wanted two specific things; a pizza and some frozen chips. I wasn’t in that much of a hurry so I followed the supermarket’s aisle layout and covered the entire store. When I got to the refrigerator section I could see a few different types of pizza, they were about £1.50 each. However the freezers were just ahead of me so I had a quick look at the frozen pizzas, these started at just 89p. For that price I felt that I was getting a good deal so I grabbed one of those and moved down to the frozen chips. The first bag that I saw was £3, but the freezer section went on so I walked down looking at the other options, as I walked the prices dropped until the cheapest bag was in front of me, this cost 99p. This got me thinking about the way the stores had positioned certain items along its shelves and how I had reacted to them. It is undeniable that 89p is really cheap for a pizza, but so is £1.50. What happened to make me decide to buy the cheaper pizza and cheaper bag of chips then? Is it simply the fact that it was cheaper or did the fact that I saw a more expensive one first?

The first price I saw might have affected my decision. This is commonly called anchoring where the person making a decision will rely upon the first piece of information given and use this initial information to make following judgements. Once an anchor has been accepted following judgements are made by adjusting away from the anchor which leads to a bias toward understanding other information around the anchor (Tversky & Kahneman, 1974). This influence of anchoring has been examined in several studies. In typical studies of numerical anchoring participants are asked to say whether a target judgement is higher or lower than a high or low anchor, after which they provide estimates of the true value for the target judgement (Strack & Mussweiler, 1997). In other studies participants are exposed to completely random numerical values that have on relation to the target value, such as spinning a wheel of fortune (Tversky & Kahneman, 1974) or the phone numbers of participants (Russo & Schoemaker, 1989). Regardless of how the anchor values are generated or presented their effects can be stunning. Numerical anchors can influence various types of judgements. After considering and rejecting high rather than low numbers as possible values for the specific judgement, people believe nuclear war is more likely (Plous, 1989) that their own abilities are better (Cervone & Peake, 1986) and that consumer products are worth more (Ariely et al., 2003).  So it is definitely possible that because I saw a more expensive pizza and bag of chips first their prices acted as an anchor which influenced my purchase decision. 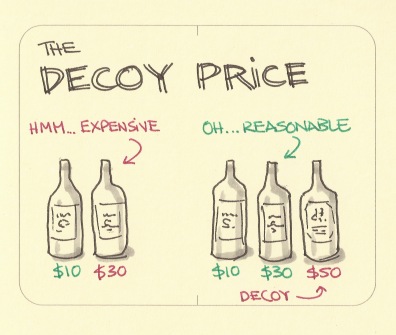 Another aspect that this store used was to place the pizzas and the chips in ascending order of price, this ends up creating decoy prices. This effect is described by Aierly (2008) who discusses the decoy effect by using the example of the Economists’ website. On the website they offered several subscription services; an internet only for $59, a print only for £125 and a print and internet subscription for $125 as well. Most people chose the last option because the print only subscription acted as a decoy. So the prices of chips and pizza in my case created some decoy prices which could have affected my decisions. In the end my decision was influenced by many factors, should I be annoyed at this? Did I have any freewill going into the store? Absolutely not, rather I actually feel kind of happy  because I have a pizza and a bag of chips for less than £2 !

Plous, S. (1989) Thinking the unthinkable: the effects of anchoring on likelihood estimates of nuclear war, Journal of Applied Social Psychology, 19(1), 67-91